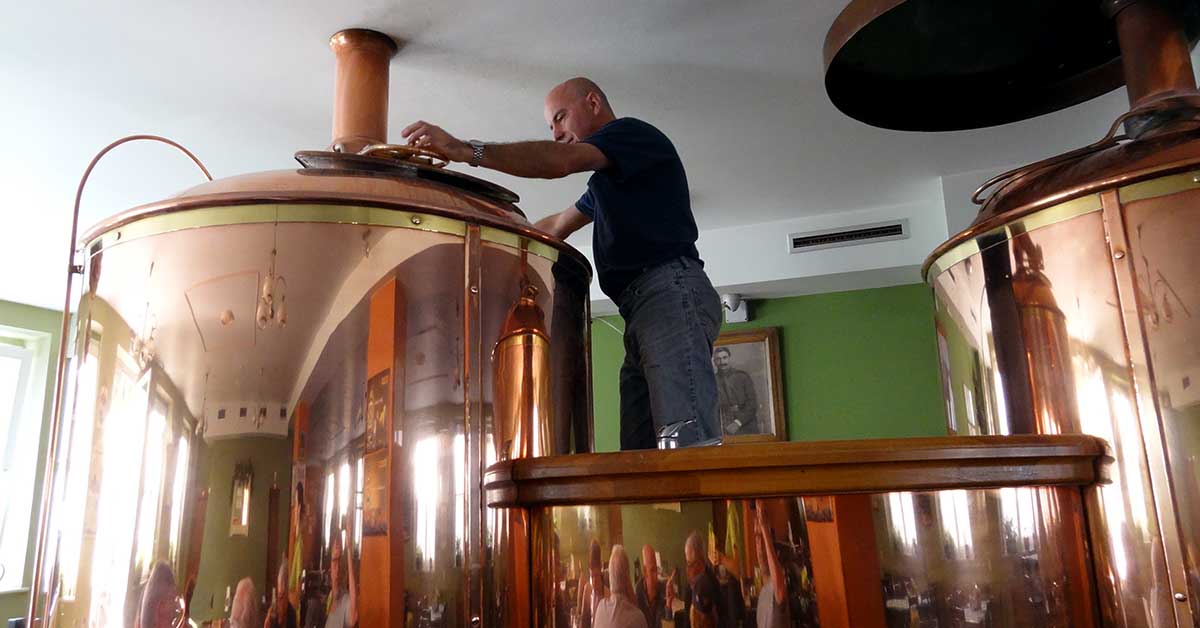 07 Sep Beer ‘Round the Clock

Posted at 14:23h in BeerTrippin, Buzz by Mitch Granholm 0 Comments
1 Like

Here’s the third update from our intrepid travelers, who are currently on Utepils’s first annual beer trip! Their goals: See the sights. Eat the food. Drink the beer. Learn about local brewing traditions. Come home with inspiration for a new, limited edition Utepils brew.
Catch up with the previous updates and stay tuned for more!

Dan heard that our free day in Olomouc dawned clear and crisp, but he—and a few others—opted to sleep in. (What’s a vacation if you can’t catch up on sleep?)

Even the non-early-birds caught the last few minutes of the hotel buffet bar, complete with complimentary mimosas. After breakfast—perhaps due to the mimosas—it was already time for a mid-morning nap for some, while others headed out to start exploring Olomouc.

The sleepyheads and explorers shared a common goal: Make it to the famed astrological clock by noon for its legendary, once-per-day performance. (We made it by 15 minutes!) Olomouc’s clock is even older than Prague’s. Early risers from the group were there on a nearby beer deck sipping a cold Pilsner Urquell and some of the latecomers joined them. Around a hundred visitors in total huddled in front to the clock to await the daily display.

It was worth the visit. The performance lasted over five minutes and was enjoyed by all. It’s amazing to think that this tradition has been in place for more than 400 years. If it could impress those of us used to fancy phones and 3D movies today, we can only imagine how it seemed to those observers in the early days.

Once the beer-drinking seal was cracked, it seemed best to wander and find some beer locations. Deb and Dan decided to track down the beer spa referenced in the previous post. They found it at St Weceslas brewpub, and were able to make reservations for the evening. The spa was down in the basement, and the stairs down proved quite entertaining: The walls featured a series of paintings depicting a young, well-dressed lady with a full beer who, as you descend the stairs, turns into quite naked lady with an empty beer going into the spa door. But we digress.

We’ve had our fill of pork and dumplings on this trip so we decided to mix things up with a pizza lunch. Later in the evening we met up with fellow Beertrippers in a delicious Nepalese restaurant. Deb and Dan arrived relaxed and serene as they came straight from the beer spa, where they spent two hours variously soaking in a hot beer bath, sweating it out in a huge sauna, and relaxing post-sauna with cold pivo (pivo is the Czech word for beer).

Others opted to spend the day in various museums, a laundry with Chinese food, considering climbing the tower with 480 steps (they didn’t), lunching at the Torture Museum (don’t worry—it’s a bar), and generally having a beery, cheery day.

Coincidentally, we all arrived at the street to the hotel at the same time in the evening and convinced the bartender to not close the hotel bar. We just needed one more. Unlike other nights, we still made it to bed early, with plans to get up early to embark for Brno, Telc, and finally Cesky Krumlov.