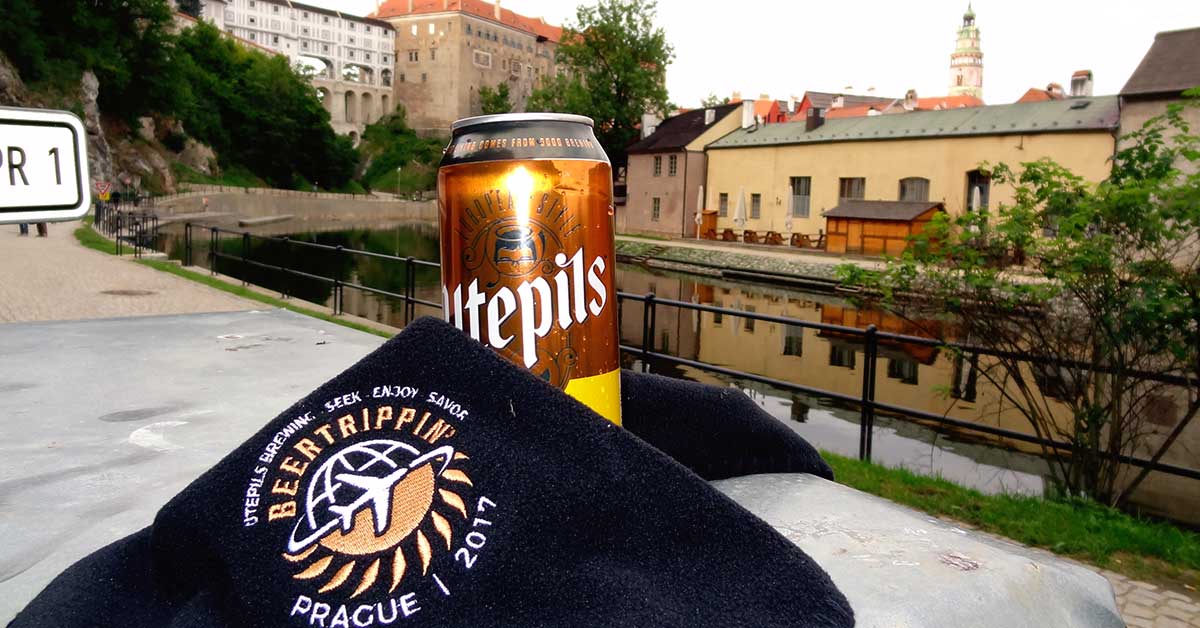 Posted at 16:05h in BeerTrippin by Mitch Granholm 0 Comments
1 Like

We hope you’ve been enjoying the updates from Utepils’s first annual beer trip and living vicariously (viBEERiously?) through our intrepid travelers. Wishing you were part of the action? This will be an annual tradition, so start dreaming about next year. VIPERs have priority access to this ultra-limited trip, so if you’re interested, make sure you’re part of our VIPER community! Ask your bartender for more information.

Cesky Krumlov or bust! We boarded the 58-passenger beer bus with just 16 of us, so we had plenty of room to spread out ourselves and bags and ride in style. The on-bus bar opened up immediately so we dedicated the day to enjoying both the ride and the Zatec beers we had been given. (And, yes, for the curious—there was a WC on board.)

We broke up our long travels with a couple of stops. First up was Brno, the second-largest city in the Czech Republic. As this was a first visit to Brno for most of us, priority #1 upon arrival was exploration. We headed off in various directions to scope out the town for a while before meeting up for lunch at the Starpromo brewery.

During pre-lunch explorations, Dan and Deb found a long winding street featuring a “drunk monk” sign for a wine bar. Down several hallways and into the hillside, we found a cozy local pub serving wines of the area. We sampled a few options and settled on two large glasses of wine and a plastic 2-liter jug of wine to go. Total cost: About $9. When we met up for lunch to exchange stories, we found that others in the group had found similar hidden gems.

One fabulous meal and several beers down, we somehow ended up buying more beer for the bus at the gift shop. We really think Minnesota needs to look at allowing breweries to sell “beer to go” in packages to tourists.

Once we were back on the bus, it was time to crank up the Bluetooth speaker and rock out with our augmented supply of beverages. Our next destination was Telc, a UNESCO world heritage site, accessed via a couple of hours of winding roads with occasionally threatening weather.

After arriving in Telc, we walked into a large plaza of homes—all seemingly frozen in time. At one point, the local prince fell in love with the new fashions of Italy, returned home with an architect and crew in tow, and decreed that all homes in the plaza—and whatever he could see from his windows—must rebuild the fronts of their homes to conform to his new standards. Hundreds of years later, little has changed, and it’s a bit of history frozen in time and on display. We found a nice patio bar for snacks and beers.

Following our stopover in Telc, we hopped back on the bus for our final two-hour drive to Cesky Krumlov. The music played on, more beers were shared, and a few naps occurred. We arrived in Cesky Krumlov fairly late, so we checked into our hotel and enjoyed a full night of rest.

Cesky Krumlov is Dan’s favorite small city in Europe…so far. Built within an oxbow in the river, it is virtually an island with a large castle perched upon a high hill. Our city guide, Carolina, walked around the overlooks, shared stories of how the city was reborn after communism collapsed, and introduced us to her dog, who escaped his yard and somehow found us!

Our tour concluded within the castle grounds. Some wandered the extensive castle gardens while others headed for the city shops. A climb up the astronomical tower drew several us to test our fear of heights, small spaces, steep stairs, and a sagging rope handrail. The view is magnificent, and I hope the photos give a small sense of the beauty and compactness of Cesky Krumlov.

For the rest of day, couples and small groups wandered about, occasionally rejoining and splitting up as beer, stories, and food were shared. The town has become a major tourist destination since Dan and Deb’s first visit eleven years ago. Selfie sticks abound, yet the charm remains.

Birds of a feather seem to flock together. As five of us entered Pappa’s Living Restaurant for dinner, we discovered two other tables of fellow beer trippers had preceded us. We promptly became the loudest tables in the place. We blame excitement, beer, wine, and amazing food. Our group has really bonded.

So much so, that seven us of later found a bar featuring local music and—what else?—local drinks. There was a very interesting birthday party going on there so we stayed for the dancing and people watching.

We also did a bit of preparation for our next day. The goal: Visit a small brewery and micro-distillery in the country. The good times keep rolling!