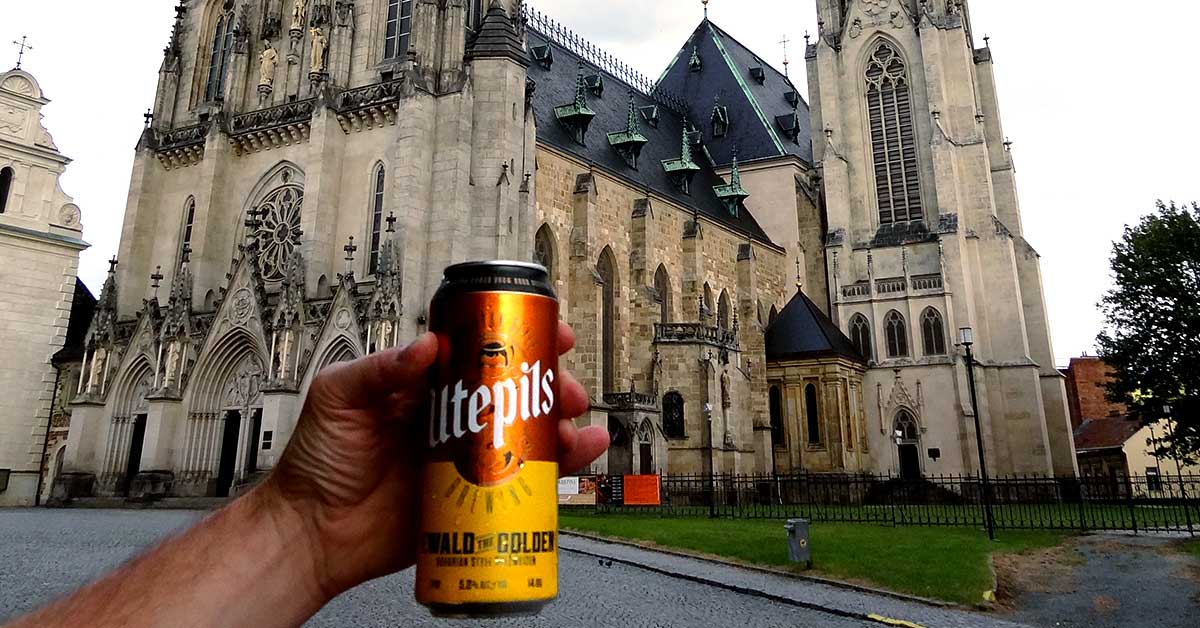 Posted at 15:17h in BeerTrippin, Buzz by Mitch Granholm 0 Comments
1 Like

Here’s the second update from our intrepid travelers, who are currently on Utepils’s first annual beer trip! Their goals: See the sights. Eat the food. Drink the beer. Learn about local brewing traditions. Come home with inspiration for a new, limited edition Utepils brew. Catch up with the previous update and stay tuned for more!

A scheduled travel day let us indulge in a necessary sleep-in after our late night at U Flecku (and, for some of us, a pub crawl on the way home!).

When we finally awoke, we dragged our bags and behinds to the train station for our three-hour ride to Olomouc, which is a former capital of Moravia and now an eastern province of the Czech Republic. After a bit of creative bag storage (imagine Deb jumping up and down on her luggage to flatten enough to fit in the overhead rack), we settled down for a nice ride.

Within 15 minutes of departing, we received complimentary champagne flutes & fills from train staff. Sweet! Shortly thereafter, the clinking cooler bags were opened to release the now chilled Zatec sample pack beers. The group was finally starting to recover from the previous night’s revelries and the libations were a welcome treat.

After arriving by train, we were whisked by taxi to our new hotel in Olomouc. We settled in and then gathered in the lobby at 4pm for a strolling tour of the city and parks with a local guide. Olomouc is an old city and former military fort that is full of impressive sights including huge walls, cathedrals, cobblestone streets, and plazas lined with restaurants and centered with monuments.

Famous genetic scientist F. Mendel lived here. Mozart, who recovered from smallpox here as a child, and Beethoven created special works for the city.
We ended our tour at a restaurant for dinner and gifted our guide with a cold can of Utepils beer. We had a delicious dinner and shared stories and plates of food.

After dinner, a few were ready to hit the hay, but Dan and Deb led a small group to a nearby brewpub to keep the festivities going. We were drawn to the brewpub due to its name, Moritz. Moritz happens to be the name of our Bavarian host’s son, who is building our new fermentation tanks. On our short walk to the Moritz brewpub, we spotted a sign for another local brewery offering a “beer spa.” Curiosity abounds. Wonder if we can get a reservation? Stay tuned.