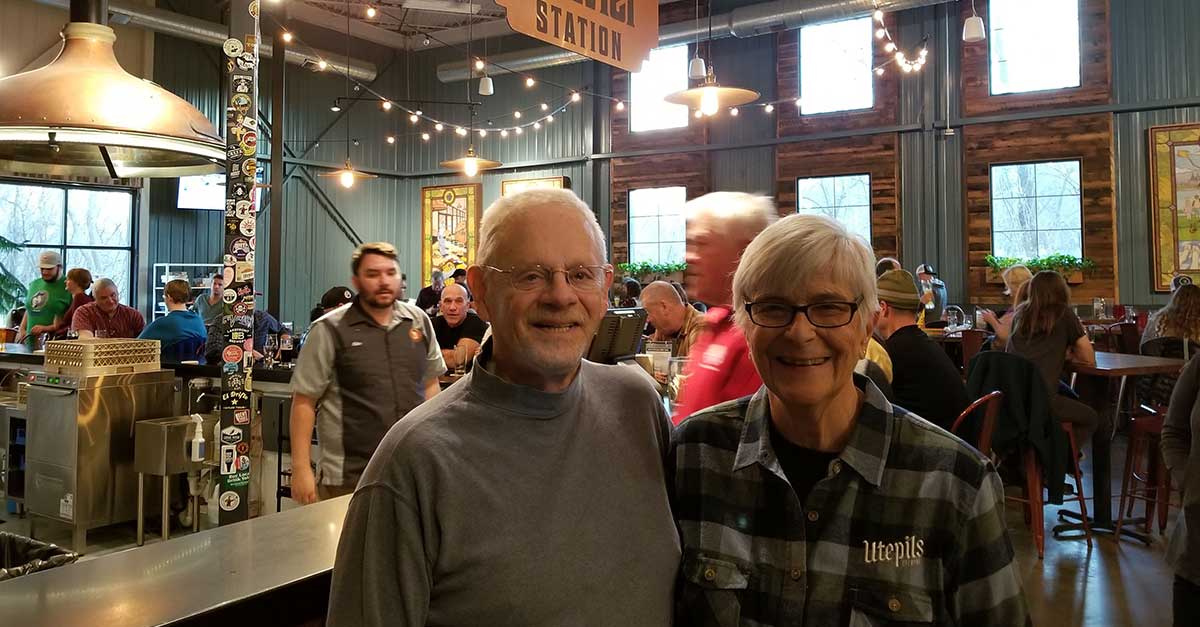 Posted at 09:17h in Buzz by Mitch Granholm 0 Comments
0 Likes

We hear plenty of people talk about how welcoming and comfortable the Utepils Fernweh Taproom is. For a warehouse-esque space with soaring ceilings and lots of beer tanks, it’s pretty warm and inviting.

So warm and inviting, in fact, that Sigrid Hutcheson and David Chapman dubbed it their second living room. Several years ago, the spouses sold their home and moved into an apartment. They love their living accommodations, but the smaller space limits their ability to entertain.

Enter Utepils and the Fernweh Taproom.

David and Sigrid regularly host gatherings small and large at the Fernweh Taproom. They call ahead and reserve a few tables, and they bring hearty snacks and buy rounds for everyone. Those who want more to eat use the food truck. “People seem to enjoy our new mode of entertaining,” says Sigrid. (To say the least.)

Sigrid just used the Taproom for their biggest event yet—her recent 80th birthday party. “We had guests ranging in age from 82 to 2,” Sigrid says. “The small children were happy with the games and the space to run around. The oldest people were happy to have a place to sit and drink beer and watch the action, and the people in the middle were able to move around and get to know people. I loved it.”

David and Sigrid do more than make themselves at home at Utepils. They’re also VIPERs as well as investors, and they love what Utepils has done for their social life. “It gives us an opportunity to hang out with people of a variety of ages,” says Sigrid, who volunteers with Utepils’s Social Aid and Pleasure Club.

As for their favorite beers, Sigrid currently favors Alt 1848 while David tends toward the Pils. Make sure to say “hi” if you see them. After all, you’re entering their living room. (Fortunately, they’re incredibly gracious hosts.)