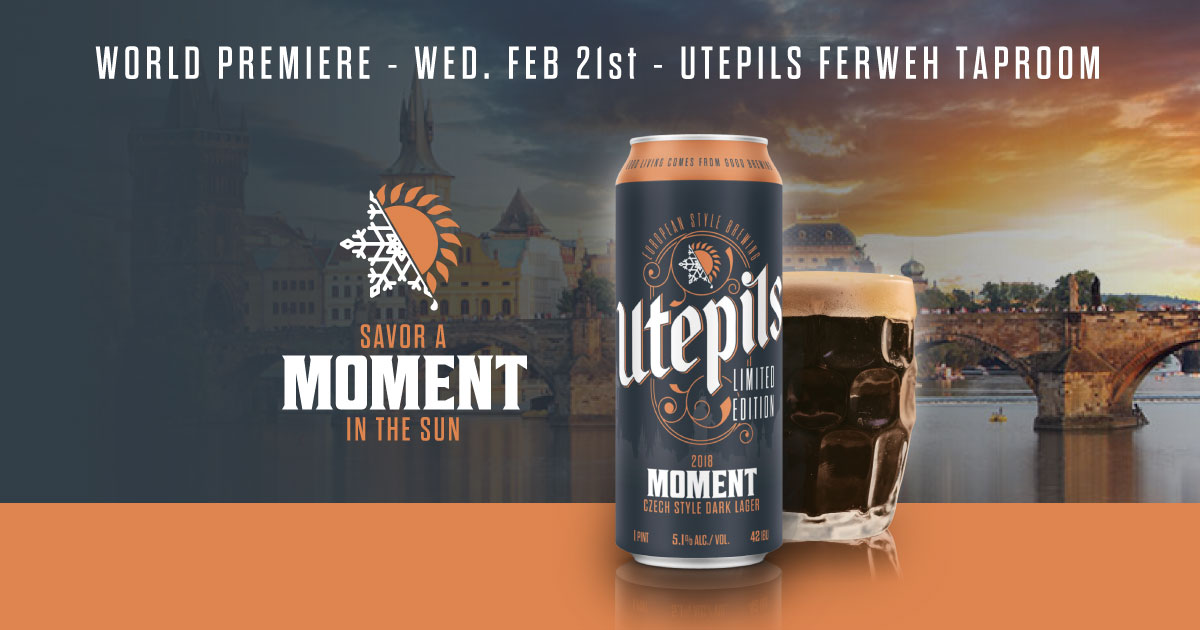 Posted at 08:25h in Buzz by Mitch Granholm 0 Comments
0 Likes

Minneapolis, Minn.: Local craft brewer Utepils introduced Twin Cities beer lovers to the idea of an “Utepils moment,” which translates loosely to “The first beer enjoyed in the sunshine after a long, dark winter.” People of the north understand that feeling and have taken to the beer in droves: customer demand, both in Utepils’ Fernweh taproom and in area liquor stores, has been so high the brewery had to expand their capacity.

Now Utepils is offering beer drinkers the chance to make their 2018 “moment” a true Utepils Moment with their first annual limited-edition Moment beer. “We take a yearly beer tasting trip to Europe (affectionately known as ‘Beer Trippin’’) in the fall, and we use that trip to find an idea or recipe to identify our Moment beer for the following spring,” explains Utepils founder and owner Dan Justesen. “These trips give us a chance to further appreciate the European traditions and styles of beer. Then we bring an idea or a flavor home and offer a fresh, local take on it,” says Justesen. “Last year we went to the Czech Republic and visited a dozen or more breweries.” The result of that trip is 2018’s Moment, a Czech-style dark lager.

“Most people thinking of the Czech Republic and beer are thinking about pilsners like Pilsner Urquell. And they’re mostly right!” laughs Justesen. “But one of the breweries we visited has been making a dark beer for 600 years. We tried that and a bunch of others, and we were hooked.”

Utepils Moment beer is very dark, almost black in the glass, but it has a surprisingly light body. It’s brewed with Czech hops, which give it a nice balance and aroma. The malt flavor comes through with suggestions of toasted bread, chocolate and dark fruit.

Recently the Czech Embassy, in collaboration with Bohemian Hop growers, requested permission to serve Utepils’ Moment and Pils beers at the upcoming national Craft Brewers Association Conference in Nashville, TN. Justesen noted “it’s quite an honor to be tapped by such experts in Czech beer; especially when we’ve only been open for one year.”

The Moment’s world premiere will be Wednesday, Feb 21 in the Utepils Fernweh Taproom. The striking limited-edition cans should start appearing on store shelves the following weekend. There will also be a very small number of kegs allowed out to select restaurants and bars.

Next year’s Beer Trippin’ destination has also been announced: it’s the A-B-C-D of beers, an exploration of Amsterdam, Brussels, Cologne, and Dusseldorf. It will add to Utepils’ already worldly menu, which offers their Dusseldorf Alt 1848, Kolsch-style Copacetic (from Cologne), and Belgian IPA Glocal.

But the team at Utepils isn’t speculating on next year’s Moment release quite yet. Not when there’s an Utepils Moment to be had right now.