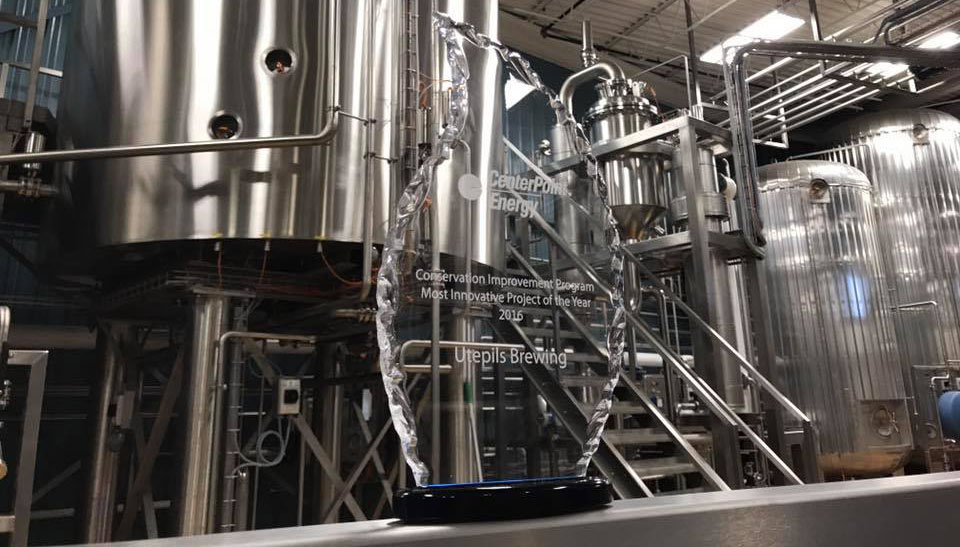 Posted at 16:17h in Buzz by Thomas Heller 0 Comments
0 Likes

Why do you care about this? Well, its most innovative project of the year was awarded to Utepils Brewing.

Utepils Brewing is a new craft brewery located on the west side of Minneapolis. In 2016, the company installed state-of-the-art German brewery technology involving heat recovery and vacuum de-pressurization. This step helped decrease the energy consumption of the brewing process by 70 percent.

“Our plan was to build our brewhouse at a size that meets what we’ll need in the future,” explained Justesen in our news about the brewery’s plans back in February. “We didn’t want to be in a constant state of upgrading our brewhouse or our equipment, so we built the upgrade.”

The brewing equipment, a maze of stainless steel pipes, mash and lauter tuns, a kettle and six giant, two-story fermenting tanks was custom designed and imported from Bavaria. The tanks were purchased from a family that’s spent three generations fabricating equipment for breweries. The brewhouse also boasts the first-ever North American installation of the energy-saving Vario Boil system — which helps cut their energy use by almost 75 percent. Award-winning brewmaster Eric Harper manages all of it using traditional skills, like smell and taste, as well as modern technology. His control center looks like the flight deck of a science-fiction spaceship.

Even the tile on the floor of the brewhouse was a subject of intense discussion among Utepils’ partners. “After all the brewing equipment is in place, you can’t just go back and replace the floor,” explained Justesen. “We wanted the best equipment we could buy on the best floor we could find, all to make the best beer we can.” As a result, the floor tiles were imported from Bavaria as well.

The brewery and taproom have been designed to suggest an old European town, with many of the interior finishings sampled from Regensburg, Germany. One wall of the brewhouse is painted green in homage to the historic Wurstkuchl tavern in Regensburg and eventually will have windows and doors added to complete the effect. The grain mill and delivery equipment is contained in a structure designed to look like the city’s clock tower.