Posted at 10:01h in Buzz by Developer Brandography 0 Comments
0 Likes

A chance meeting between two women brewers at an industry event a few years back has led to big things for Minnesota’s women brewers — and beer lovers.

“The initial conversation was along the lines of ‘I only know of four women in the state that brew, do you know any more?’ ” said Jordan Nordby, lead brewer at Utepils Brewery in Minneapolis. “And a year later that turned into ‘Let’s find as many women brewers as we can and bring them all together to make a beer.’ So that’s what we did. We have now found about 25 women in the state that are actively brewing.”

For three years, the group has been meeting at different breweries to collaborate on a beer for International Women’s Day on March 8. This year, the group came to Utepils, and the result is the limited release In All Places.

How do the tastes and styles of a large group of brewers come together in one beer? Collaboratively.

“The hosting brewery gets to decide the style of beer that is being brewed since they know what they will be able to sell to their customer base,” Nordby said. The brewer drafts the initial recipe, and others weigh in with feedback on the overall concept of the beer, from taste to naming and label design. On brew day, the women convene to help create the beer while learning about the hosting brewery’s equipment and processes. 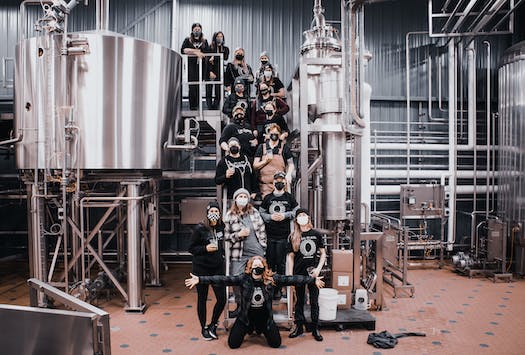 ERIK EIDEM, @THEBARDOFBEER
Women brewers from around the state collaborated on In All Places.

“We are trying to have brew days two times a year to keep building those relationships,” Nordby said.

In All Places — a brown ale that’s malty, nutty and biscuity with a touch of sweetness — comes with a nod to its purpose: “Every sip of this delicious beer is a reminder that women belong in all places decisions are made.” The beer will debut March 8 in the Utepils taproom at an event featuring live music, raffle and a supply drive for a women’s shelter. In All Places also will be available in liquor stores and restaurants; check the “find our beer” page on utepilsbrewing.com.

But that effort isn’t the only one.

The women of Lift Bridge, led by lab technician Bailey Larson, have released Free the Bibs, its seventh annual beer for International Women’s Day — and the first Dunkelweizen-style beer for the Stillwater brewery.

The beer also was created to raise awareness of women’s role in the beer industry, notably that men aren’t the only ones “wearing the pants” in brewhouses.

The limited-release beer is on tap at and in crowlers at the brewery, with a portion of the proceeds going to Valley Outreach, a Stillwater nonprofit that provides food, clothing and support to those in need.

And Modist Brewing in Minneapolis is among the breweries worldwide participating in the brewing of Brave Noise Pale Ale, a collaborative effort to provide inclusive and safe environments for women, BIPOC and LGBTQIA+ throughout the beer industry.

International Women’s Day, first celebrated in 1911, is a global celebration marking the economic, political and social achievements of women.